Why is the Norwegian government supporting promotional campaigns abroad?
The DAB system has a hard time getting an impact around the world. Canada left DAB many years ago and today HD Radio is the digital platform for terrestrial radio in North America and Mexico. But DAB interests will not give up the Americas. A central figure in the Norwegian lobby last week lectured at radio conferences in Medellin and Bogota in Colombia. He presented slanted graphics and exaggerated statements including withholding important truths about DAB and FM in Norway as well as in Europe.


Ole Jørgen Torvmark claims that FM radio is completely shut down in Norway and will never return. However, there are no such decisions regarding local radio on FM. He also claims that the Norwegians are happy with the change and the many new radio stations (without mentioning that these still belong to the same three media groups that previously broadcast nationally on FM). He never mentioned that listening to national radio have decreased overall. Some of the DAB channels have less than 1% audience share. To name a few examples. 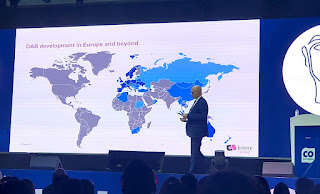 The picture behind Torvmark on the scene shows the world map “DAB Development in Europe and beyond”. (Although Torvmark's company Kreere AS is marked as source, it is the same picture that WorldDAB usually shows).
(Enlarge image by clicking on it)

The map clearly shows the exaggerations for marketing the DAB system. The coloring of several countries is extremely misleading. Russia and China are not DAB countries. These geographically expansive countries - such as Brazil, India and Pakistan - opt out of DAB because it will be expensive with the huge number of transmitters needed if DAB is to replace AM and FM. Several countries that are colored on the map have indeed granted permission to DAB, but will retain FM and also welcome other competing systems such as DRM (South Africa, Australia) and CDR (China).

It is not enough for a country to appear politely interested when the lobby woos the its government and perhaps assist setting up some test transmitters  (eg Spain, Turkey, Thailand, Mongolia) to consider the country being ”a DAB country”. Using angled graphics is not something that Torvmark invented, but is used systematically by WorldDAB to impress blue-eyed decision-makers and journalists. One may also wonder why Torvmark does not tell us about the countries that have decided to leave DAB behind (eg Canada, Taiwan, Portugal, Hong Kong, New Zealand and Ireland).

The foul play of Torvmark and the DAB lobby  is made clear by avoiding talking about the most crucial part of the radio landscape; the LISTENERS. There are only five countries in the world with a weekly listening of DAB exceeding 15% (UK, Norway, Switzerland, Denmark and Australia). To indicate which countries where DAB broadcasts are being tested but the number of listeners are extremely few (eg Spain, Sweden, Turkey, Ukraine) is of course misleading. Globally, the share of DAB radio listeners are still below 1 percent.

Ove Jørgen Torvmark, as a major operative for the transition from FM to DAB in Norway, in Colombia succeeded in portraying himself as an important person in the Norwegian and European radio industry. Officially he is a representative of the company Norsk Radio (formerly Digitalradio Norge AS)  which also connects to the state owned public broadcaster NRK. Torvmark also works for the lobbying organization WorldDAB were with another Norwegian Jørn Jensen at NRK has been active for many years.

Many Norwegians are upset over the unrestrained propaganda for the transition to DAB. A project which is now perceived as a failure. It is now being discussed in social media whether the Norwegian government via embassies, the Ministry of Culture and/or NRK is involved in this promotion campaign. Who has given Ole Jørgen Torvmark this assignment - and why? Do Norwegian politicians know what is happening in NRK now? Who will dare  to question the public broadcaster’s DAB commitment?

The common problem with the DAB lobby is that you will never hear about any problems and shortcomings that exist with the system. Everything is said to improve with DAB. This poses a serious credibility problem, especially when a public broadcaster is involved. When you criticize the system's economy or technology there will be an arrogant silence.

What are the motives for the Norwegian government to promote a certain digital radio system around the world? Why has Norway never evaluated solutions for terrestrial digital radio other than DAB,  for example DRM, HD Radio and 4/5G LTE Broadcast?

To date, the Norwegian Ministry of Culture has, after formal requests, refused to present any objective sources about the DAB system other than facts provided by the DAB stakeholders. Before the decision in Stortinget (the parliament) 2016, representatives of other digital radio stakeholders outside the DAB sphere were never consulted.

Is there an inconvenient truth here?