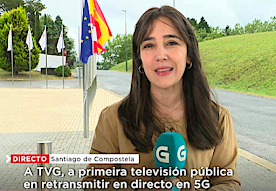 Mobile technology is expanding terrestrial radio/tv
Televisión de Galicia (CRTVG) has become the first Spanish public channel to carry out a live broadcast using 5G technology with connectivity provided by Telefónica.The live connection was made from Monte del Gozo, in Santiago de Compostela fthe Galician regional channel. Mercedes Fernández, manager of innovation at Telefónica España, said: 5G represents a revolutionary change in live broadcasts of the media, by making them more efficient and flexible. In fact, the media is one of the sectors that will obtain the greatest benefits with the arrival of 5G together with industry and the connected car.

According to Sara González, director of the technological and media support Area of CRTVG it was one of the first channels in Spain to implement 4G technology for live broadcasts. The 5G, among other advantages, will allow to increase the reliability of the retransmissions, to increase the quality of the transmitted image thanks to its great bandwidth and to reduce the delays.

TVG is the only TV station in Spain with more than one channel to offer all its content in HD, and the first in the autonomous region to launch a channel entirely on YouTube.

The first 5G Broadcast was carried out by BBC in Scotland 2018.