Terrestrial broadcast DRM + is now also available in the FM band. A global challenge for DAB.

Chinese Gospell, Swiss StarWaves (including "TukTuk Radio"), and Indian Avion have launched new models of DRM standalone and car radio sets. Unlike before, most receivers have now also been adapted for DRM for all broadcast bands; medium wave (MF), short wave (HF), VHF band I-III including the FM band (DRM +).

An article in the radio industry magazine Radio World indicates that it will be possible to adapt current analogue FM receivers also in mobile phones to DRM + without any extra hardware. This is particularly interesting for India where a very large proportion of the population listens to radio in their mobile phones and smartphones; online or on FM. 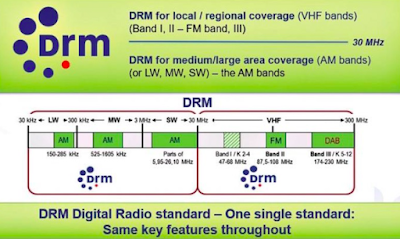 Within the allocated bandwidth of 200 kHz, a radio station can transmit up to six high quality audio channels together with data services and emergency systems. This can be done without disturbing the simultaneous analogue FM signal. The DRM system has been used for transmissions (DRM30) for over ten years, primarily on shortwave, but also to some extent mediumwave.

With India opting out of investing in DAB and instead DRM, development has gained momentum in India and neighboring states. Both DRM and DAB are European systems, but today DRM has a stronger position than DAB in vast major countries such as India, China, Russia and Brazil.