Digital Radio Trial on the FM Band in Copenhagen

Also to be received in Southern Sweden.

On 31 August 2020, the Danish Radio and Television Board granted Open Channel Aps in Copenhagen to conduct trial operations with digital radio DRM + on the FM band for the next 12 months, but can be extended twice more for 12 months.

The broadcasts are planned to start during the last quarter of this year on the frequency 86.5 MHz, 500 Watt ERP and with a bandwidth of 200 kHz, which makes room for two DRM + channels. Each DRM + channel has a capacity of 186.4 kbps with space for three digital radio channels with a slideshow, a total of six digital radio stations can thus be broadcast here. There are ambitions to involve the Öresund region and possibly collaborate with another FM station on the Swedish side. 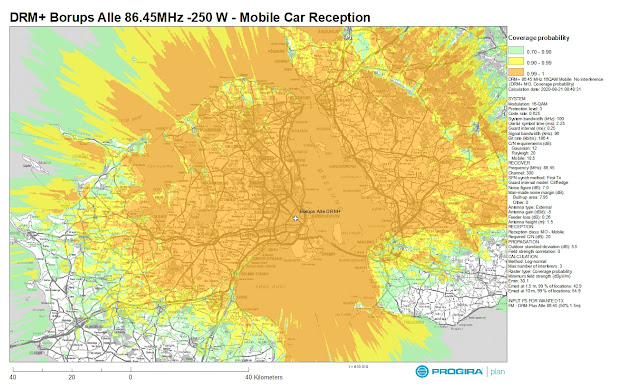 The trial on the 86.5 MHz frequency has also been approved by the Swedish Post and Telecom Agency. The fact that the experiment is done a bit below the regular FM band (87.5-108 Mhz) is due to the fact that there is no space in this dense region. The new receivers for DRM + can handle 64-108 MHz (VHF bands I and II).

A major problem for the development of DRM+ over a period of ten years is been a lack of receivers in the consumer market. The interests behind the competing system DAB have been very strong, especially in Europe. Now, Chinese, Indian and German companies have provided the Indian market with standalone receivers and car radios that can receive DRM not only on shortwave and midwave but also on FM (DRM+).

Unlike DAB, which can only be transmitted in VHF band III, the DRM system can be used for digital broadcasts on all broadcast radio bands from longwave to VHF bands I-III.