New opportunities with more effective coverage for terrestrial radio in Northern Europe. The AM band being further developed globally.
Radio 208 in Copenhagen is a new radio station focusing on oldies from the period 1964-1984 with the emphasis on the 70s and rock. "The Rock of Copenhagen - Progressive Rock 1964-1984". Radio 208 broadcasts around the clock at a wavelength of 208 meters (1440 kHz), a frequency that many people in Denmark - at least music fans over 50 years - know; the legendary European radio channel Radio Luxembourg until 1991, says the founder Stig Hartvig Nielsen.


Hartvig Nielsen has previously been channel manager for DR P4, board member of public broadcaster Danmarks Radio and CEO of Radio ABC and Radio Viborg. - In the rest of the world, the mid-range band is still widely used, but it has not been in Denmark in recent years. By contrast, mid-range radio stations are still among the most popular in many cities in the United States. In countries such as South Africa, Australia, Japan and Spain as well as the United Kingdom, the medium wave has continued to attract many listeners, and in the Netherlands a number of new private radio stations have been launched in the middle years, Hartvig Nielsen told the  technical magazine Ingeniøren.

Radio 208 can be received at 1440 kHz in the Copenhagen region as well as southwest Sweden (Skåne). During the first day, reports came from listeners around Europe. You can also listen to the radio208.dk online. In addition, broadcasts on shortwave are started shortly within 5800 kHz.

For the first time since 2011, since DR closed its transmitter in Kalundborg at 1431 kHz there are on medium wave broadcasting from Denmark. The 1440 kHz frequency is also used by Saudi Arabia with a very powerful transmitter of 1.600 kW. Radio 208 power output is 300 W, but an increase to 500 W is planned.

There are plans to expand the medium-wave business with a further two frequencies of 846 and 927 kHz. This applies to World Music Radio, which already broadcasts "popular, tropical world music" on shortwave, and the news channel NB24.

The reception is also good in Malmö, just as several listeners have written that they have received Radio 208 in northern Germany and even in Finland. With a good car radio you can hear in large parts of the major Danish islands.

There have been a lot of inquiries from people who think it is fantastic that you can now hear radio again on the medium wave in Copenhagen and also many from Skåne in Sweden, says Stig Hartvig Nielsen. 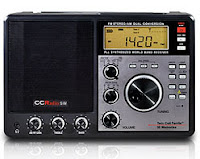 On the global market most stand-alone and portable receivers as well as in-car radios are equipped for AM (medium wave) and FM. Medium wave broadcasting is receivable in most homes as well in older cars.

It is mainly in the Nordic countries that the medium wave (MW) has been closed  and replaced by FM. Some MW transmitters remain in the Nordic countries such as on the Faroe Islands and Svaldbard in the Arctic. Danmarks Radio still broadcasts 243 kHz long wave radio from Kalundborg. Unlike FM and DAB, you can reach the fishing fleets and other vessel traffic in the North Atlantic via MV and LV.

Thus, MW has a superior geographical range and in some countries have invested in new stations with high output power. This can provide full national coverage with a significantly fewer number of transmitters than FM, not to mention DAB. In addition, you have the opportunity to reach far beyond the borders of your country. From an emergency standpoint, of course, AM is by far superior to other systems for terrestrial broadcasts.

India has invested for its public service radio in a new transmitter network with 27 powerful medium wave transmitters from GatesAir. These are also used for digital broadcasts on the MW band using the DRM30 technology.

In Hungary, the world's strongest MW station (540 kHz) (which is also prepared for DRM30) has been established. In the United States, there are approximately 4,500 MW (AM) stations. Some also transmit digitally on MW with the HD Radio system.

Australia has decided to maintain all terrestrial broadcast platforms, AM, FM and DAB. A government report in 2015 with radio industry backing, stated that it is a major challenge to establish DAB networks that cover large geographical areas with a small and dispersed population. The insight has proved being wise in connection with the increasing number of fire disasters outside the major cities. MW is the backbone network for emergency broadcasting in Australia.

In the United Kingdom, broadcasting permits are still approved for community radio (local radio) on both AM and FM.