Analysis: The DAB project is threatened by a new global listening platform
European Broadcasting Union believes that 5G will be good for television, but not for radio. 5G-Broadcast will not be developed (further) for radio claims Antonio Arcidiacono, EBU director of technology and innovation, at a panel discussion during Medientage in Munich. According to the EBU, one reason is that the introduction of DAB+ in Europe should not be jeopardized by diverting too much attention by discussing a new standard.


DAB+ is an excellent digital technology for terrestrial radio reception, which should not change in the near future, says Arcidiacono. But with high power in FeMBMS mode and therefore specifically for video, 5G Broadcast has the ambition to become the world standard for television in the long term. We have a great opportunity to uphold a global standard and to bridge unicast and broadcast services for mobile devices based on the same transmission technology, Arcidiacono said.

A working group was set up within EBU - the association for public broadcasters - to uphold this new standard for mobile telephony across Europe: 5G-MAG, Media Action Group for 5G. Arcidiacono invited companies in the media, telecommunications and automotive industries to become members of 5G MAG. While this initiative was facilitated by the EBU, 5G-MAG is an independent association with its seat in Geneva, Switzerland. It is an EBU setup similar to how the lobby organisation WorldDAB was launched.

It is startling to note that EBU and 5G-MAG endorse all kinds of future 5G applications including television but NOT just broadcast radio.

The 5G-MAG group has been set up to allow EBU to influence the development of 5G Broadcast. But EBU and others who still believe in DAB as the future of digital radio seem to put a lot of efforts in order to exclude radio on 5G.  An example is a reader letter Digital Radio vs 5G in the industry magazine Radio World where the apparently technically skilled writer highlights the problems that will be with the range for radio broadcasts at the ultra high frequencies (3,5 Gb and higher) normally used for 5G. But he "forgets" to mention the broadcast tests performed on the 700 MHz band.

The lobbying that EBU conducts against broadcast radio on 5G is in many ways similar to how EBU managed to put the brakes on DRM the more modern European digital radio standard trying to establish itself in Europe. DRM is more rangewise efficient system which India, China and Russia will choose.

What EBU and other DAB advocates never mention is that DAB radio is not found in the world's 2.6 billion smartphones. There is a lack of public market analysis or technical motives which indicate if DAB ever will be integrated in smartphones - or in connected cars. The strength of radio via 5G also lies in the fact that most listeners will in any case still be connected online and will own a smartphone, while for DAB you have to use a separate portable or stand-alone receiver. 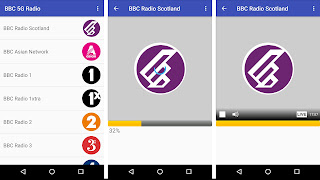 The DAB system has so far been kept alive through strong government subsidies and compulsory measures such as in Norway where the national FM network was shut down 2018. But in a free market there is still no consumer demand for DAB. If FM continues to live with digital alternatives such as mobile broadband, it will probably be impossible for DAB to be able to continue in more than a couple of countries where it is established today. But even in the nation with a significant share of DAB radio, the BBC will invest most in the future Internet.

However, despite EBU opposition, the BBC continues its trials with 5G Broadcast in Scotland. Also, a trial project starts carrying the Austrian public broadcaster ORF's radio and television channels in Vienna. Last fall, when the German state of Lower Saxony decided not to invest further in DAB, this was done expressly in order to prioritize other technologies such as 5G.