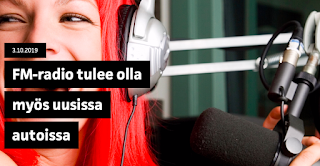 EU directive on car radio challenged
In 2020, an EU requirement is that car radio receivers in new passenger cars should be able to receive and reproduce radio services provided via digital terrestrial radio broadcast. In Finland, which has opted out of DAB already 2007, the radio industry wants a requirement for FM receivers. In a joint statement, public service company Yle, the commercial radio organization Radiomedia and the media organization Medialiitto write that the EU directive must be supplemented when it is implemented as a law in Finland

The joint statement:
In adopting the EECC Directive (European Electronic Communications Code) nationally, it must be secured that the regulation will safeguard the possibilities of the Finnish media audience to receive domestic radio content. In addition, the right of the citizens to receive emergency warnings from the authorities, which are mainly sent through an FM radio receiver, must be secured. In a crisis, an FM radio is often the only way to receive reliable, relevant information.

However, the EECC Directive requires providing that terrestrial digital radio receivers are obligatory in all new cars. In practise, this means DAB radio networks, which will not be taken into use in Finland.

Therefore, it is important that the possibility of the media audience to listen to domestic radio channels is secured in Finland by providing that all new cars must have an FM radio receiver in addition to the DAB receiver. This is possible according to introductory phrase 306 of the Directive.

The statement in Finnish

The EU requirement, which the DAB lobby has succeeded in piloting into the European Parliament, thus applies to new car radio receivers and thus only in passenger cars does not include trucks, buses and similar commercial vehicles. If you do not have a separate car radio receiver installed and only listen via the Internet (Connected car or via smartphone) this rule does not apply.

However, the term "terrestrial digital radio” is increasingly open for many interpretations. Broadcast radio over the mobile broadband network on 4G or 5G with the technology LTE Broadcast should, according to technical experts, be considered "terrestrial digital radio". This is also the platform that mainly via smartphones will become the expected complement to or replacement of FM radio, not DAB.

So far, Norway is the only country in the world which has replaced national FM with DAB. Finland and Sweden have no plans to follow their neighbor's example.