The parliament chamber also liked the idea of such a threshold. Since January 1, 2020, broadcasting radio programs via FM stations has been voluntary.  The radios are therefore free to jointly or individually waive the use of their FM transmitters in advance, i.e. before the radio license expires at the end of 2024.  Neither the Federal Council nor the federal administration intervene in this decision-making process, wrote the government in September in a statement on Ruedi Noser's motion.

If the motion also gets through in the lower chamber, National Council, the ultra-short wave would only get the fatal blow at the very last moment.  However, for the analogue it  seems it is already five to twelve anyway.  According to a government financed research 88 percent of users now receive their radio digitally, i.e. via DAB+, TV networks and/or the Internet.

The government is desperately trying to cover up the blatant failure of their FM strategy with fake news writes Roger Schawinski in an op-ed. The government wrote that the goal of 90 percent has almost been achieved because today “only 12 percent of radio listeners only use FM”. 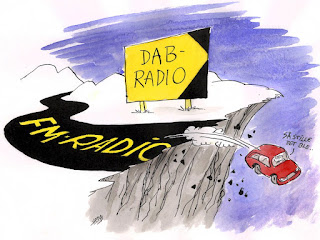 It's disturbing. Firstly, the Federal Council's answer in no way refers to reception in the car, where less than 50 percent of all vehicles have so far been equipped with DAB+ or the Internet. That is where the problems of an early switch off of FM would be most devastating. Second - and much more abruptly - the Federal Council's answer is deliberate misleading. The survey on radio usage, financed by Bakom, launched the phantom number of “12 percent exclusively FM” in order to push their cause with dishonest means. Because the real, the relevant value is the amount of the market share, and not the one about the «exclusive» use. And this market share for FM reception is currently not 12 percent, but 27 percent, writes Schawinski.

On Tuesday, motionary Ruedi Noser left no doubt in the Council of States that he is not only interested in terminal care for FM but also primarily about the benefits and disadvantages of DAB technology - although he sees the main disadvantages.

If you look at the DAB standard, from a digital point of view it is actually history.  I don't know whether you have already noticed that practically everything that comes onto the market today is attached to the Internet.  The DAB standard is not an Internet standard.  The DAB standard is a separate technical standard for radio - nothing else, he told Zurich FDP politicians and council colleagues.

Specifically, Noser asks the parliament to check whether the federal government is not promoting an “outdated standard” with the subsidies for DAB.  Because the Internet standard is free for all radio providers and it will “most likely prevail”, according to the Zurich Council of States.

Maybe at some point we would have to discuss switching off DAB, Noser said.

The Final Countdown -The Future of DAB Radio Is Over