Politicians Want Local Radio to Continue on FM in Norway

Local radio stations and listeners opt out of DAB
Will local radio continue on FM? That was the big issue in the political debate at the national annual conference, organized by the Norwegian local radio association in Oslo on 5 April.  On the same day, Kantar Media presented measurements that show that FM is by far the most important platform for local radio. 73% of the listening is on FM. When it comes to closing FM, Norway is still an island in the world. No other country has such plans. 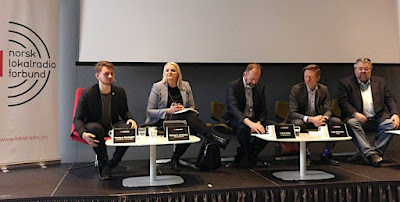 Initially, several politicians revealed that they have not yet invested in DAB radio in the car.
This is a nobrainer, said Åslaug Sem-Jacobsen and pointed out that the Center Party has come up with a separate proposal to allow local radio to continue on FM until 2031.

We had all hoped that this would be included in the media bill, says Tage Pettersen H, who is also chairman of the Culture Committee, but he defended the Minister of Culture's decision to wait with the decision. Morten Wold pointed out that Frp has always wanted to have local radio continue on FM. Trond Giske, Ap, was also disappointed that the FM issue was not included in the media bill that was presented last week, but he considered that there was a great consensus that the Storting will allow local radio to continue on FM; "You can be quite confident that 2021 will not be extinguished for local radio," Giske told the participants at the national annual conference.

The importance of local radio for local democracy was also discussed, and in general it was surprising that this had not been dealt with in the media bill. Several in the panel wanted to increase state support for the local radio.

Freddy Øvstegård SV thought that local radio did not receive much financial support; much of the grant system instead goes to the development of DAB.  He claimed that there should be two different grant schemes, one for content and one for digitization. Giske Ap also believed that local radio gets a microscopic part of the media support. Åslaug Sem-Jacobsen Sp thought that local radio could also play an important role in the fight against false news.

At the conference, Knut-Arne Futsæter, Kantar Media, presented current statistics. Almost everyone now has access to digital radio, either via DAB, internet or digital TV. It has sold over six million DAB receivers in the country, but there are still only 1.75 million cars with DAB. 93% of daily listening is via DAB and 7% via FM, while in car only 49% listen to DAB and 14% on FM.

Initially, the parliament decision on a transition from FM to DAB set a course that when the local radio licenses on FM expired in 2020 also this sector should follow the national channels over to DAB.

Over the last 2-3 years, however, within the local radio community the resistance against such plans has steadily increased. This is due to the fact the community discovered that a transition would impair the ability of local radio to survive because DAB is in many ways a poorer solution when it comes to technical robustness, geographical reach and economy.
Especially, this will be a hard hit for non-commercial community radio which often is run by and for ethnic groups.

For Norway's close neighbours - Sweden and Finland - there is not even a discussion today about DAB anymore. The current emergency debate with forest fires and storms has also highlighted the FM radio's continued strong position in Scandinavian counties and Baltikum.

The fact that Norway is still the only country in the world that has closed FM for its national channels has also made an impression on many. No other country, than possibly Switzerland, has such plans today. FM continues to be a world standard listening platform which is being challenged solely by the online connected smartphones.