199 local and community radio stations remaining on FM the winners 2017.

There are currently about 3 million DAB receivers in Norwegian households. Meanwhile, still there are about 10 million FM receivers most of which probably not will be scrapped. This points to changing listening situations. How much and how long? An analysis recently presented to the Norwegian media bureaus reveals brutal facts showing that NRK - the public service radio - in 2017 while keeping its dominant position on the radio market will lose 500,000 daily listeners in the transition to DAB. Also P4 Radio Norge become losers.


P4 (MTG) will maintain their listening, but loses 20% of GRP* (impact) and Radio Norway (Bauer) loses 100,000 and 35% of its current GRP. The winners appear to as well as those transmitting both DAB and FM. The latter category includes commercial local radio company 21st Venture AS broadcasting in Oslo and four other cities. 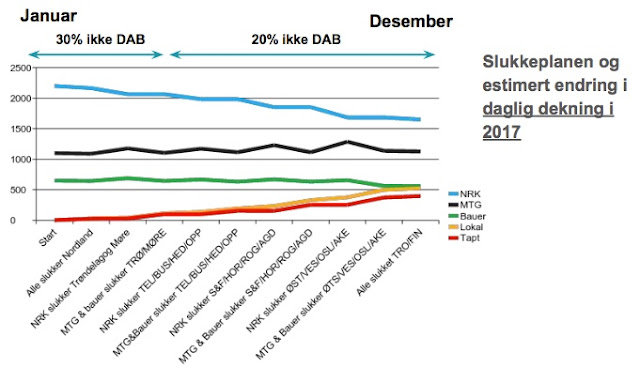 21st Venture AS, which is responsible for the analysis, indicate the options that arise when national FM network is turned off. For example opens avenues will open for cross-border broadcasting from Sweden which will not close its FM-networks. Local radio will also increase its coverage reach and Internet in cars will have an explosive growth in coming years. It is estimated that 400,000 daily listeners disappear to other channels, Swedish Radio, Spotify, podcasts, etc.

It also pointed out that the local radio station to continue on FM least five years and that no political decision has been taken that the FM should be closed after 2022.

Overview today presented by the daily Dagbladet reveals that after the so-called "FM switch-off" 2017 there will be 199 local radio station still on air on FM in Norway. While not necessary being against DAB per se there is a massive opinion in media and by experts per serejecting an FM closure. A national poll earlier this fall showed that two out of three Norwegians did not want this.

Facts:
* GRP = access to radio receivers x x percentage who listens how many times a day you listen x how long you listen every time.