Will the format continue its amazing growth?
Country’s dominance of U.S. radio continued unabated in 2015, registering a fourth-consecutive year of growth in the number of stations. There were 2,125 country stations in December 2015, a 2% increase over 2014, according to Inside Radio’s PrecisionTrak database.  - News/talk remained No. 2 with 1,354 outlets and  Spanish-language stations jumped 4% last year to 872, to rank third.

Country’s station count pivoted in 2012, when it reversed a five-year decline. It’s been climbing ever since. Country should remain very healthy, says Hubbard Radio VP of programming Greg Strassell. But some wonder how long it can continue its momentum. It is such a lifestyle format and that success will depend on its ability to continue to connect with its audience outside of the music, says Jeff Sottolano, VP of programming, CBS Radio.

News/talk remained No. 2 with 1,354 outlets, a 3% decline from 2014. With a divided electorate heading into a crucial election, the format may gain some ground back this year.

The number of Spanish-language stations jumped 4% last year to 872, to rank third. It was followed by classic hits, which grew to 850 outlets, up from 785 one year earlier. Sports dipped slightly to 780 to rank fifth according to Inside Radio. 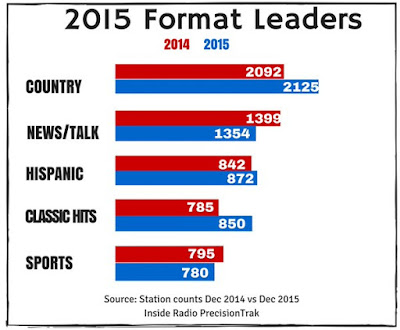