Signs of a saturated market for DAB with continued FM and adding smartphones
Media agency Ofcom has presented studies showing that 27% of UK radio listening is via DAB which is two thirds of all digital radio (Internet and via television network). This is the highest percentage in the world, but DAB was introduced already in 1995. Now there are signs that the DAB listening is approaching its climax. Ofcom has also asked the households which do not have a DAB receiver if they expect to buy one within one year. 6 out of 10 households responded that this is not likely (13%), is not at all likely (21%) or certainly not (25%). Only 14% would consider buying a DAB receiver.


FM Radio continues to dominate listening in the UK which is not unexpected since it is estimated there are approximately 110 million FM receivers in the country. There is also no government decision, as in Norway, to close FM.

Measurements of radio listening is based on some uncertain factors, since a household can have multiple radio platforms (AM, FM, DAB, Internet via television networks and/or satellite). One factor to add in recent years is also the increased music and radio listening via smartphones. 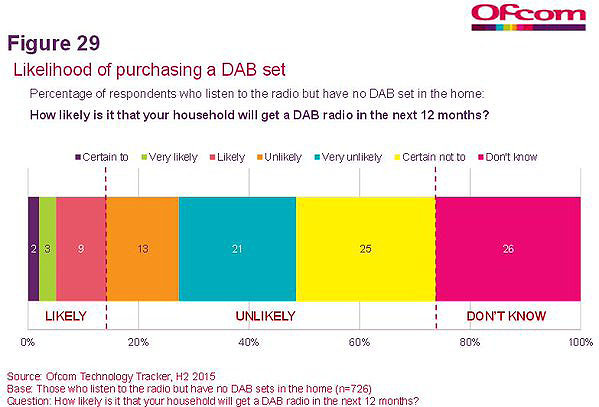