DAB and DVB-T2 on the Thai agenda. The challenge is local radio.
The planned transition of radio broadcasting from analog to digital system seems in serious danger of being postponed, with the term of the incumbent broadcasting committee at the National Broadcasting and Telecommunications Commission due to expire next year. The optimization of radio frequencies through a broadcasting transition from analog to digital technology is among those key plans, which have been delayed since last year from what was set out under the original Broadcasting Master Plan (2012-16).


The broadcasting committee having just 17 months left might not be sufficient time for it to bring all crucial aspects to fruition.

The experiment used the existing infrastructure of the Armed Forces, as well as the separate infrastructures of the Army, Navy and Air Force, the National Police, the Public Relations Department, the Secretariat of the House of Representatives, and MCOT. The test was aimed at furthering research on the feasibility of digital radio, which will be transmitted over the very high frequency (VHF) band III, some of which carries analog terrestrial-TV broadcasts.

Another objective was to raise public awareness about digital radio broadcasting, which will have an impact on everyone in the country. The transition to digital radio would be in tandem with the analog-TV switch-off process. (The Nation).

Another problem, which Thailand is struggling with today, is the huge amount of radio stations available in the country with thousands of small local radio stations. There are no precise counts of community radio stations. However, in 2009 more than 6,000 local community stations registered with NTC to notify their intent to be on the air.

Plan A for terrestrial digital radio via DVB-T2 rather than DAB+ using the three times more efficient standard DVB-T2 Lite will solve the problem with capacity for local radio. By using this technology the transmission structure for digital terrestrial television can also be utilized. The difference in capacity between DAB+ and DVB-T2 Lite can be illustrated as below comparing the systems in the long term plan for Thailand: 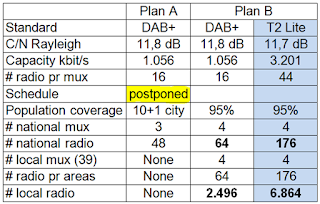