Strong position for FM radio, only to be challenged by Internet radio.
DAB radio marginalized in Germany.

A report presented by the media authorities shows that analogue FM transmission still dominates some 90 years after the introduction of radio and 20 years after the start of digital radio. 94 per cent of German households not only have FM reception at their disposal but also own an average 3.5 receivers. The chance of a radio service to reach an audience is many times higher for FM than for any other mode of transmission.

Reception via the Internet lags far behind in second place. Around one quarter of the German population (26.5 per cent) at least occasionally listen to radio on the web. A seventh each of the population now and then resorts to radio via satellite (14.8 per cent) or cable (13.8 per cent).

Digital radio is listened to with a DAB receiver by just under 5 per cent of the population. 4.5 per cent of German homes have a DAB set at home and/or in the car, putting the number of DAB receivers in German households at a 2.7 million which are used by 3.4 million listeners. 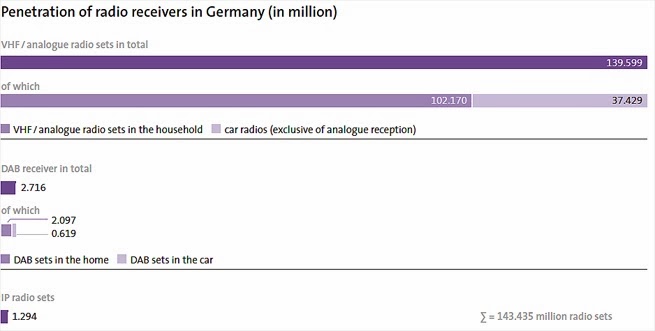 According to an analysis in the report around 140 million FM receivers including 37.5 million car radios present an invaluable base for the reception of the services being consumed, and their economic viability. The opportunities for advertising contacts brought about in this way for the advertising industry constitute the economic basis for the commercial success.

And although listening to radio via FM is the most frequent mode of reception for 70.7 per cent of the age group 20 – 29, internet radio already scores a very significant 12 per cent as the most popular listening mode. By contrast,the average of 4.2 per cent for cable or satellite as the preferred radio consumption mode in this age group is low, and at 0.2 per cent for digital radio very low.

There are many indications to conclude that radiolistening via the Internet and the modern types of receiver (smartphone and table PC) will successively increase in the population overall as well. Internet radio is currently still used most frequently via the PC (18 per cent of the population). In addition, 10.2 per cent listen to the radio via their mobile phones, 4.0 per cent via the so-called IP radio and a good 3 per cent via tablet PCs. If this upward trend continues traditional radio will find it increasingly harder to keep its strong position in the market if the competition via the internet platforms gains in strength. On the other hand, radio as a genre has so far benefited from the new modes of reception brought about by digitization.

The report also points to the fact that General Motors in the U.S. will no longer install FM radios in cars but only to offer options for radio reception via 4G/LTE or the internet. This is just one example of the developments radio must watch with a view to their relevance for the future of radio as a genre, as are the multimedia plans of German car manufacturers for audio fittings in connected cars

Two years after the restart of digital radio, market penetration has at least reached around 5 per cent of the German population. Digital radio via the internet, however, has seen better progress with a quarter of the population listening to radio via the world-wide web. For more than one tenth of the age group 14–39 years it already constitutes the main mode of reception. This does not, however, impact greatly on FM which is used by 94 per cent of the population via 140 million receivers in the market; for four fifth of listeners it is the most frequently used mode of reception.