Demands for emergency alert broadcast capacity major driving force. iPhone market share down
New data from the second quarter of this year shows that a record number of smartphones with their FM reception capability enabled were sold in the U.S. during the period. Since 2012, the broadcasting industry R&D unit PILOT has tracked the sales and FM capabilities of top-selling smartphones in the U.S. This usually equates to around 20-25 smartphone models, representing the lion’s share of U.S. sales during any quarterly period.
For  the second quarter 2016, U.S. sales of these leading smartphones in which at least one carrier has fully activated FM radio reception hit 12.7 million units representing 46% of the total top-selling units sold during the quarter. 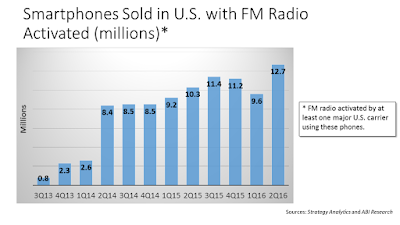 Another ground-breaking trend noted shows that, for the first time since PILOT has been tracking these sales, Apple iPhone sales fell below 50% of the total. This is significant because Apple has never activated the FM receiver chips that have been included in iPhones since the 3GS model appeared in 2009, making the iPhone the only device that FM-receiver friendly carriers (which now include Sprint, AT&T, T-Mobile and others) have not been able to offer with FM capability.

iPhone sales falling to only approx. 38% of top sellers represents a major shift in the Android vs. iOS market balance. Since all top-selling FM-activated smartphones are on the Android platform to date, this change is welcome news for radio broadcasters.

Verizon’s has enabled FM reception in its version of the popular Samsung Galaxy S7 and& S7 Edge devices. This marks the first time a top-selling Android smartphone has had FM capability enabled by all four major U.S. wireless carriers.

The broadcast industry’s effort toward voluntary activation of FM capability by device manufacturers and wireless carriers is bearing fruit according to PILOT.