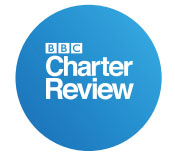 Timetable must be set by listeners. Still only 14% of radio listeners listen exclusively to digital radio.
In its response to the government’s green paper on the future of the corporation, the BBC says it cannot fund the costs of such a switchover without significantly impacting services. Further build out of the DAB networks to reach the same coverage as FM would be a major undertaking, likely to increase radio distribution costs by between £40m to £45m a year exclusive of any work to maintain the existing networks.

The Government has been clear that its decisions about any analogue switchoff will be led by listeners. We agree. While there has been positive growth, digital listening remains work in progress. 40% of listening is now digital and on current trends we would expect the 50% target to be met around 2018 to 2019. 14% of radio listeners listen exclusively to digital radio; the vast majority either listen to a mix of analogue and digital (47%), or analogue only (35%). In-car listening is growing, but is far from universal— only one in four cars have a digital radio—leaving 29m cars on UK roads with no means of receiving digital radio.

Digital listening has become more diverse in recent years. Nearly 8 million people access digital radio via their television every week84 and online listening is growing faster than DAB (albeit from a lower base). Since 2012 overall internet listening has increased significantly and young audiences listen to almost as much radio over the internet as over DAB85. Internet services offer new creative opportunities, choice and convenience alongside broadcasting; our new music ideas for the next Charter, for example, while retaining links with our broadcast services, can only be fully exploited with an internet connection.

The Government has set a target of 50% digital listening to be reached before it determines the future of radio distribution and any timetable for a possible switchover. Until then, and likely for some time afterwards, a hybrid model—combining FM, DAB, DTV and IP—will be needed to meet our obligation to ensure our radio services are widely available in a cost-effective way. The BBC’s committed level of DAB expansion will be reached in 2016. At that point pan-UK coverage will exceed 97%, with coverage for local services around 90%.

We propose to meet these commitments, and continue to support DAB at this level, as long as we are funded to do so. Further build out of the DAB networks to reach the same coverage as FM would be a major undertaking, likely to increase radio distribution costs by between £40-£45m a year exclusive of any work to maintain the existing networks. We are not convinced of the value for money case for any fur ther such investment, particularly while digital listening remains below 50%, with DAB listening only a proportion of that.

When the 50% listening target is met, the planned review of digital switchover by Government should look at the right mix of platforms. If the Government proceeds with switchover, this will likely impose cost on some consumers and likely require marketing and communications effort by industry. The beneficiaries include commercial broadcasters, transmission providers, equipment manufacturers and other par ties who may benefit from the analogue broadcast spectrum released.

Within the Budget funding agreement, the BBC cannot fund the costs of such a switchover without significantly impacting services. It would be counter-productive for the BBC to be required to help fund switchover to a digital world from which it was simultaneously removing muchloved digital radio services.